Poland’s team made it to the semi-finals in Deauville after competing in two qualifiers for this year’s Longines EEF Series. They finished their group ranked 4th with 140 points! Our team will take part in the next competition held 23-26 June in France.

The following riders competed in the qualifier in Drammen, Norway, today: Przemysław Konopacki and Home-Run (0/0), Marek Lewicki and La Pezi (4/4), Krzysztof Ludwiczak and Niko (4/12) and Mściwoj Kiecoń and Digisport Codeina (8/16), finishing in 8th place. The top three ranks in the competition went to countries that did not score in the Northern Region of the Longines EEF Series, with Brazil (1/1) first, followed by Ireland (4/4) and Belgium (4/4).

During the earlier qualifying round in Aalborg, Denmark the Polish team consisting of: Jarosław Skrzyczyński (Inturido), Przemysław Konopacki (Home-Run), Maksymilian Wechta (Chepettano) and Adam Grzegorzewski (Issem) also scored a successful performance. They finished the qualifications in sixth place, and third in our group.

The Polish national team collected a total of 140 points in the Longines EEF Series. Together with Norway (190 points), Denmark (180 points), Sweden (160 points) and Lithuania (130 points) they managed to advance from the Northern Region group. Deauville will also see teams from Spain (180 pts), Ireland (180 pts), Belgium (160 pts), France (160 pts) and Portugal (120 pts), who competed as part of the Western Region.

The final of the Longines EEF Series will take place on September 11 during the CSIO 4* WARSAW JUMPING at the Służewiec Racecourse. 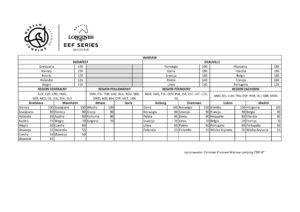