Gorla Minore hosted the inauguration of the Longines EEF Series in 2021 and was the venue for the last qualifying round of the 2022 season, which was held on 17 June 2022. It was the last chance for the countries of the southern sub-league to win a ticket to the semi-finals held later in Budapest (30.06-3.07). Prior to the competition in Gorla Minore the teams of Austria, the Netherlands, Germany and Switzerland were certain to start in the Hungarian capital alongside the host country.

Consisting of 12 obstacles and 15 jumps, the course designed by Andrea Colombo was ridden by seven teams: Belgium, France, Greece, Spain, Switzerland, Italy and Great Britain. After the first leg the teams of France, Switzerland and Great Britain were in the lead with 0 penalty points. In the second leg the British team, consisting of Oliver Fletcher & Hello William, Joe Whitaker & Hulahupe JR, Joe Fernyhough & Calcourt Particle and Amy Inglis & Wishes, continued with zero points. As many as three members of the team cleared both of their Nations Cup rounds flawlessly. However, despite their victory, the British team did not score in Italy. They were followed by the French, Swiss and Italians with a final score of 8 penalty points. The order was determined by the total time of the individual riders.

Gorla Minore saw the teams from Italy and Greece join the other semi-finalists for Budapest.

Earlier we found out the teams that would fight for a ticket to the Warsaw finals in the French Deauville (23-26.06). These include Belgium, Denmark, France, Spain, Ireland, Lithuania, Norway, Poland, Portugal and Sweden.

The grand finale of the 2022 EEF Series will be held in Warsaw, Poland, September 8 to 10. Warsaw Jumping will feature the best teams from the semi-finals. 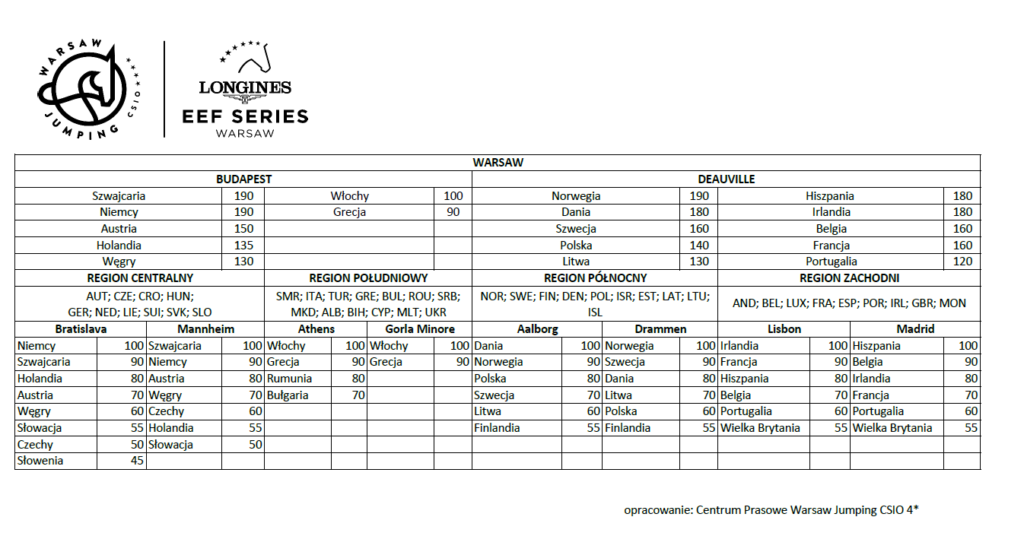